The door was only a few feet ahead on my right, on the inside curve of the hallway. I slowed down, turned, and stopped in the opening.

I looked in cautiously. I saw a round room about sixteen feet across with a domed ceiling about ten feet high. Equally spaced around the room were three rectangular outlines resembling closed doorways.

No one there. The room was totally empty except for a single chair that faced away from me.

I looked behind me. The hallway was still empty. I slowly entered the room. I hesitated to approach the high-backed chair. There might be somebody sitting in it that I could not see from behind.

I circled, keeping my distance from the chair, checking to see if anyone was sitting it it. I followed the curve of the wall to get around to where I could see. I was ready to beat an instant retreat if I should see one of those hideous creatures again. I stopped every few steps to crane my neck over the back of the chair. Seeing nobody, I continued around to where I could ascertain, with much relief, that the chair was unoccupied.

Glancing apprehensively toward the open door, I slowly went toward the chair. As I gradually approached it, a very curious thing began to happen. The closer I got to it, the darker the room became! Small points of light became visible on, or through, the walls, even the floor. I stepped back and the effect diminished. I stepped forward and it increased again, the points of light becoming brighter in contrast to the darkening background. It was like the stars coming into view in the evening, only very much faster. The matte gray of the metal wall just faded out to be replaced by the glinting, speckled deep-black of space.

I looked at the controls on the chair. On the left arm, there was a single short thick lever with an oddly shaped molded handle atop some dark brown material. On the right arm, there was an illuminated, lime-green screen about five inches square with a lot of black lines on it that intersected each other at all angles. Under that, a square of approximately twenty-five colored buttons arranged in about five vertical rows with one color for each row. I looked for symbols or written words and found none.

The experiment I was considering was risky, but I was desperate. Maybe one of those buttons would open a door or something. On impulse, I went ahead and pushed one of the green buttons. I looked around the room and listened carefully — nothing happened. When I pushed the button, I noticed that the lines on the screen had moved. I recklessly pushed another green one. The lines rapidly changed angles, slid down each other, then stopped. I pushed some of the other colored buttons. Nothing happened. Nothing moved and no sound could be heard.

Trembling, I sat down on the hard surface of the chair. I put my hand onto the molded T-grip of the lever. The handle was slightly small for my hand. The whole chair seemed a little too small. I rotated the handle of the lever forward, feeling the slow, fluid resistance of it. I felt suddenly disoriented as the stars began moving downward in front of me, in unison. Quickly I pulled my hand off the lever, which returned to its original vertical position. The stars stopped moving, but remained where they were when I released the lever.

If this thing is flying, I could crash it or throw it off course and get lost or something! I resolved not to tamper with those controls anymore. I might escalate a desperate situation into a fatal disaster.

I got out of the chair and walked to the edge of the room. As I did, the stars faded out and the surfaces of the wall, ceiling, and floor came into sight. I moved over to one of the rectangles resembling closed doors. I searched the edges for a sign of a switch or an opening mechanism. Seeing none, I put my eye to the crack; I could not see any light. I looked around for some kind of symbol or writing that would help me figure out where I was or how to get out of there. None.

I walked back to the chair and stood beside it, looking at the buttons. I was thinking about pushing some of them, when I heard a faint sound. I whirled around and looked at the door. There, standing in the open doorway, was a human being! 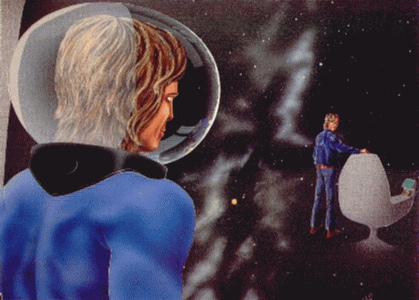 I stood frozen to the spot. He was a man about six feet two inches tall. His helmeted head barely cleared the doorway. He was extremely muscular and evenly proportioned. He appeared to weigh about two hundred pounds. He wore a tight-fitting bright blue suit of soft material like velour. His feet were covered with black boots, a black band or belt wrapped around his middle. He carried no tools or weapons on his belt or in his hands; no insignia marked his clothing.

I ran up to him, exclaiming, babbling all sorts of questions. The man remained silent throughout my verbal barrage. I was worried by his silence. He took me firmly but gently by the arm and gestured for me to go with him. He led me out of that room and hurried me down the narrow hallway, pulling me along behind him due to its narrowness.

He stopped in front of a closed doorway that slid open, into the wall. I did not see what caused it to open. The door opened into a bare room so small it was more like a foyer or section of hallway. The door slid shut quickly and silently behind us. Again I attempted to talk to the man as we stood there. No answer.

We spent approximately two minutes in the metal cubicle, no more than seven by five by twelve feet. Then a doorway, the same size as the other door and directly opposite it, slid open.

The brilliant warm light that came through the opening door into the airlock-like room was almost like daylight in color and brightness. Fresh, cool air wafted in, reminding me of springtime in the out-of-doors, making me realize just how dark and stifling that place had been. What relief that fresh air was! The air moved around me in a softly fluctuating current. I stood and inhaled deeply the clean, cool breeze. The last tinges of the ache in my head and chest almost completely disappeared. I had nearly forgotten the discomfort that had been with me constantly since I had regained consciousness. 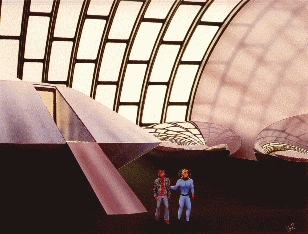 I decended a short, steep ramp seven or eight feet to the floor. I looked around to discover that, although I was outside that dim, humid craft, I was not out-of-doors. I was in a huge room. The ceiling was sectioned into alternating rectangles of dark metal and those that gave off light. The ceiling itself curved down to form one of the larger walls in the room. The room was shaped like one-quarter of a cylinder laid on its side.

The outside of the craft we had just left was shaped like the one we had seen in the woods, but was very much larger, about sixty feet in diameter and sixteen feet high. It did not emit light; instead it had a surface of shiny brushed-metal luster. It seemed to radiate a faint heat from its hull. The craft either sat flat on its bottom or, if it had legs, they were only a few inches high. It sat nearly in the middle of the large room.

On my left, toward one end of the large room, there were two or three oval-shaped saucers, reflecting light like highly polished chrome. I could see two of them very clearly, and a silvery reflection that could have been another shiny, rounded craft. They were about forty or forty-five feet in diameter, quite a bit smaller than the angular vehicle I had just come out of. I saw no projections or breaks in the smooth, shiny, flattened spheres. They sat on very rounded bottoms and I could not see how they balanced that way.

The man escorted me across the open floor to a door that opened silently and quickly from the middle outward. We were in a hallway about six feet wide, illuminated from the eight-foot-high ceiling, which was one long panel of softly diffused light. The hallway was straight and perhaps eighty feet long. Closed double doors were distributed along the corridor.

At the end of the hallway, another pair of double doors. I watched closely this time. I did not see him touch anything, but again the doors slid silently back from the middle. We entered a white room approximately fifteen feet square, with another eight-foot-high ceiling. The room had a table and a chair in it. But my interest was immediately focused on the three other humans!

Two men and a woman were standing around the table. They were all wearing velvety blue uniforms like the first man's, except that they had no helmets. The two men had the same muscularity and the same masculine good looks as the first man. The woman also had a face and figure that was the epitome of her gender. They were smooth-skinned and blemishless. No moles, freckles, wrinkles, or scars marked their skin. The striking good looks of the man I had first met became more obvious on seeing them all together. They shared a family-like resemblance, although they were not identical.

"Would somebody please tell me where I am?" I implored. I was still utterly shaken from my encounter with those awful creatures. "What in hell is going on? What is this place?"

They didn't answer me. They only looked at me, though not unkindly. One man and the woman came around the table, approaching me. Silently they each took me by an arm and led me toward the table. I didn't know why I should cooperate with them. They wouldn't even tell me anything. But I was in no position to argue, so I went along at first.

They lifted me easily onto the edge of the table. I became wary and started protesting. "Wait a minute. Just tell me what you are going to do!" 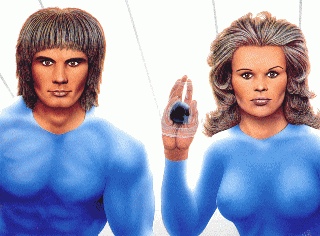 I began to resist them, but all three began pushing me gently backward down onto the table. I looked up at the ceiling, covered with panels of softly glowing white light with a faint blue cast.

I saw that the woman suddenly had an object in her hand from out of nowhere — it looked like one of those clear, soft plastic oxygen masks, only there were no tubes connected to it. The only thing attached to it was a small black golfball-sized sphere.

She pressed the mask down over my mouth and nose. I started to reach up to pull it away. Before I could complete the motion, I rapidly became weak. Everything started turning gray. Then there was nothing at all but black oblivion . . .