"Ugnng . . ." I moaned silently. My first glimmer of slowly returning consciousness brought with it the single overpowering sensation of pain.

"Oh, damn!" I gritted my teeth against the agony. The excruciating ache almost caused me to lose consciousness again. I felt badly burned, all over, even inside me.

I was lying on my back. I didn't try to move or even to open my eyes at first. I was weak, so watery-weak, that I knew if I attempted to move even my arm I'd lapse back into unconsciousness. A bitter, metallic taste covered my tongue. My mouth was dry and I was very thirsty. Oddly, the weakness in my muscles did not seem to come from hunger. The trembling felt odd, like a strange mixture of exertion and illness. Something was terribly wrong.

I sluggishly dragged my eyelids open. I could not see anything. Then a blurred image began to coalesce. My eyes struggled against the agony. My sight shifted in and out of focus. My vision slowly became clearer. The hazy scintillations of light gradually solidified into an image. I could make out some kind of light source above me.

The fixture was a luminous rectangle about three feet by one and a half feet. The diffused light came from the flat, frosted surface of the rectangle. For an instant I could distinguish the brushed metal luster of a ceiling in the softer, reflected glow above the light. The fixture seemed to be suspended lower and closer to me than the ceiling. I deduced from the nearness of the ceiling that the hard flat surface I was lying on was a raised table of some kind.

What's the matter with my eyes? I asked myself. The ceiling is all crooked. It's too small on this end and too large on that end! Were my eyes playing tricks on me? I closed them against the discomfort, but soon opened them again to ward off the feeling of vertigo that welled up in me. The odd-shaped ceiling was indeed as I had perceived it: generally triangular, with the base toward my feet.

What a weird place! I reflected wonderingly. I had been hurt. Yeah, that was it! . . . But what? I could remember straightening up and feeling as though somebody had whacked me with a baseball bat.

Suddenly, the memory of what happened before I'd blacked out came rushing back with stunning impact. I remembered standing in the clearing in the woods looking up at the glowing saucer!

It was very hot and humid. The heavy air was almost stifling. It smelled slightly stale and muggy. I was sweating; warm moisture beaded my temples. Feeling my jacket bunched up under my arms, I wondered why a nurse had not removed it. I still had all my work clothes on, even my boots, and the jacket was just too warm. I must be injured so bad there wasn't time to take off my coat, I thought. Maybe I was in an emergency room of some kind.

Then I felt something pressing down lightly on my chest. It felt cool and smooth. I looked down and managed to hold my eyes open long enough to see that my shirt and jacket were pushed up around my shoulders, exposing my chest and abdomen. A strange device curved across my body. It was about four or five inches thick and I could feel that it extended from my armpits to a few inches above my belt. It curved down to the middle of each side of my rib cage. It appeared to be made of shiny, dark gray metal or plastic.

I looked past the upper edge of the device. I could see the blurry figures of the doctors, leaning over me with their white masks and caps. They were wearing unusual, orange-colored surgical gowns. I could not make out their faces clearly.

Abruptly my vision cleared. The sudden horror of what I saw rocked me as I realized that I was definitely not in a hospital.

I was looking squarely into the face of a horrible creature! It looked steadily back at me with huge, luminous brown eyes the size of quarters.

I looked frantically around me. There were three of them! I struck out at the two on my right, hitting one with the back of my arm, knocking it into the other one. My swing was more of a push than a blow, I was so weakened. The one I touched felt soft through the cloth of its garment. The muscles of its puny physique yielded with a sponginess that was more like fat than sinew. The creature was light and had fallen back easily. 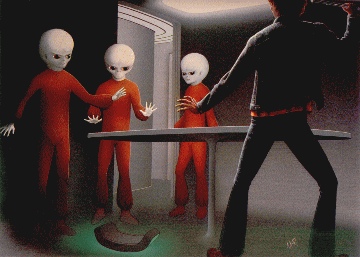 I lunged unsteadily to my feet and staggered back against a utensil-arrayed bench that followed the curve of one wall. I leaned there heavily, keeping my eyes riveted on those horrid entities.

My action had caused the device across my chest to crash to the floor. No wires or tubes connected it to me, or to anything else. It rocked back and forth on its upper side. The rocking sent shifting beams of greenish light out onto the floor, from the underside of the machine.

My aching body would not do what I told it to. My legs felt too weak to hold me up. I leaned heavily on the counter. The monstrous trio of humanoids started toward me. Their hands reached out at me.

With the superhuman effort of a cornered animal, I ground out the strength to defend myself. Fighting the splitting pain in my skull, I grabbed for something from the bench with which to fend them off. My hand seized on a thin transparent cylinder about eighteen inches long. It was too light to be an effective club. I needed something sharp. I tried to break the tip off the tube. I smashed the end of the glasslike wand down on the waist-high metal slab I had been lying on. It would not break.

I sprang into a fighting stance with my legs spread wide to brace for the attack. I lashed out with the weapon at the advancing creatures, screaming desperate, hysterical threats. The creatures slowed but continued toward me, their hands outstretched.

"Keep back, damn you!" I shrieked menacingly.

They halted. In a snarling crouch I held the tube threateningly back behind my head. I felt hopelessly trapped. I was surrounded, with my back to the wall.

They stood still, mutely. They were a little under five feet in height. They had a basic humanoid form: two legs, two arms, hands with five digits each, and a head with the normal human arrangement of features. But beyond the outline, any similarity to humans was terrifyingly absent.

Their thin bones were covered with white, marshmallowy-looking flesh. They had on single-piece coverall-type suits made of soft, swedelike material, orangish brown in color. I could not see any grain in the material, such as cloth has. In fact, their clothes did not appear even to have any seams. I saw no buttons, zippers, or snaps. They wore no belts. The loose billowy garments were gathered at the wrists and perhaps the ankles. They didn't have any kind of raised collar at the neck. They wore simple pinkish tan footwear. I could not make out the details of their shoes, but they had very small feet, about a size four by our measure.

When they extended their hands toward me, I noticed they had no fingernails. Their hands were small, delicate, without hair. Their thin round fingers looked soft and unwrinkled. Their smooth skin was so pale that it looked chalky, like ivory.

Their bald heads were disproportionately large for their puny bodies. They had bulging, oversized craniums, a small jaw structure, and an underdeveloped appearance to their features that was almost infantile. Their thin-lipped mouths were narrow; I never saw them open. Lying close to their heads on either side were tiny crinkled lobes of ears. Their miniature rounded noses had small oval nostrils.

The only facial feature that didn't appear underdeveloped were those incredible eyes! Those glistening orbs had brown irises twice the size of those of a normal human eye's, nearly an inch in diameter! The iris was so large that even parts of the pupils were hidden by the lids, giving the eyes a certain catlike appearance. There was very little of the white part of the eye showing. They had no lashes and no eyebrows.

With all the screaming and the hysterical questions I had thrown at them, they never once said anything to me. I did not hear them speak to each other. Their mouths never made any kind of sound or motion. The only sounds I heard were those of movements, and my own voice.

Just as I girded myself to spring at them, they abruptly turned and scurried from the room! They went out the open door, turned right and disappeared. The anticlimax of their retreat was incredible. The extra adrenaline that had squirted into my bloodstream left me trembling uncontrollably. I collapsed back against the bench, struggling to slow my racing heart. I gulped the heavy air in ragged gasps.

Afraid of the aliens' return, I looked toward the door. No sign of anyone. I needed something better to defend myself with. I noticed an array of strange instruments lying on the bench. The instruments were arranged near the middle of the bench, leaving either end of it clear. There was nothing I recognized, but some of the chromelike objects reminded me of those in a laboratory or doctor's office. All of the objects were too small to be effective as weapons. I was more afraid of being hurt by some of those instruments. I touched nothing more, throwing the clear tube I still held down on the floor.

I've got to get out of here, I thought frantically with a surge of determination.

There was a curving hallway about three feet wide outside the door. The ceiling of the hall gave off a faint, almost unnoticeable illumination. I looked to the right down the narrow, dimly lit passage in the direction the aliens had run. There was no one in sight.

Seeing nothing in the passage to my left, I began walking that way. I broke into a frightened run down the narrow corridor. The cramped hallway turned continuously in a tight curve to the right. I dashed past an open doorway on my left without looking in, only ten feet down the hall from the door I had just exited. I caught a glimpse of a room but was afraid to stop.

Wait just a damn minute, Travis! I struggled to get a grip on my self-control. What if I missed a chance at that doorway to find a way out of this place? I saw another doorway ten more feet ahead on my right. I slowed down to a walk as I neared it.